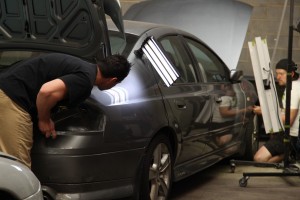 Paintless dent removal is the art of removing dents without the need to respray the vehicle. The industry in some ways is really historically related to the skills workers who removed dents in assembly lines in the car companies in Europe during the 1940’s. The skills and associated industry somehow re-emerged in the last 30 or so years. Insurance companies now favour the use of paintless dent repairs in the case of hailstorm related damage of course if paint has not been damaged.

Generally, there are two main techniques used: pushing dents with tools specifically developed for this industry or glue-and-pull techniques. In the glue-and-pull case, a special glue is applied with a tab which sets rather quickly and given a sudden jerk. This in effect pulls the dent out and may take a few pulls to complete the dent repair.

In both glue-and-pull as well as pushing dents, there may be the requirement of tapping down the dent since the metal may have been pushed or pulled too far or improperly. The metal science comes into play here with the concept of reversing the dent.

How do you set up a business in PDR?